I have always believed that all of the art forms are an expression of our emotions. Some people like to write, sing, paint, dance and some act. For me, the easiest way to express and connect to a higher power has been through dance and mainly through Kathak. The name Kathak comes from the Sanskrit word Katha which means story. When a person tells a Katha they become the kathakar. A Kathak dancer uses face expression, bhava, movements, and rhythms to tell the story. When dance origina 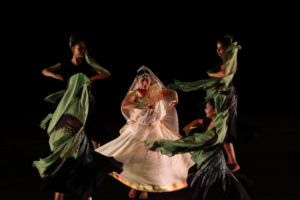 ted in the temples the Katha was mainly about the various Hindu Gods and Goddesses.Through symbolic gestures, the Gods are described. How they look, the colour, their nature, how they protect and love humans. In higher studies of dance, we are taught that in the Sama Veda, Bharat muni with the help and guidance of Brahma Ji wrote his knowledge of dance and music that has a healing effect on the human body. Bharat muni shared this script which we call Natyashastra with us. In Natyashastra there are 36 chapters on just dance. He wrote in detail about how to depute and describe Rupa or Natya. A dancer can, therefore, describe the different rupas/ forms of the Gods and Goddesses. Tala, which means rhythm, is a Sanskrit word. In dance, it is dived. Ta stands for Tandava, which you might know as Shiva’s dance. The movements are designed to deal with emotions like anger, sadness, depression, and other negative feelings and thoughts. La in the Tala stands for Lasya, which is Parvati’s dance. The movements are designed for expressing the shringar, the feeling of love and romance.

Mostly bringing forth the positive emotions for their families because the female energy has the power to heal and to forgive. Tandav is physically more expressive, whereas Lasya is emotionally more expressive. The words ”Ta thei” are the main words in the language of Kathak, and they stand for: I am using my body on this earth to express God. The Dhrupads have often used chants like Hari Om Narain; praise the Almighty. In dance, these have slowly been changes to Nom, Tom, Na and re. Tom, tatt, dha are some of the heavy bols, which are often shown by the lower part of the body, where the root chakra (Muladhara) is located. These are sounds that are played by mridang for the tandav dance. Nom, na, re these are much lighter words which resonate with the vibration of the chakras located in the middle of the body, like the Solar Plexus (Manipura). These are found both in Tandav and Lasya. Ni, tin, Om, resonate with the chakras like the third eye or the crown chakra. Which gives us a direct connection to the source or God. These are the chakra that gets activated when a dancer becomes unaware of their body movements but just connects to God. That is Raj yoga, the meditation. That connection, that love is what is the main purpose of our movements, yoga, dance, Raj yoga – does not matter which expression we choose. The purpose is the same, to connect and share.